Development of novel diagnostic tools with interest for point of care applications represents one of the main research fields for the nanobiotechnology. Either brand new devices or improvement of existing ones are being developed thanks to the use of nanomaterials and nanotechnologies. Between the various devices, biosensing systems based on electrical and electrochemical transducing schemes together with paper-based lateral flow assay (LFA) systems are overall in the focus of interest given the simplicity and cost efficiency of detection. Among the various biosensing system performance requirements the high sensitivity and selectivity of the response are crucial for applications in clinical diagnostics. The fulfilment of such requirements means the detection of low levels of clinical biomarkers in human fluids. Due to the fact that the biomarkers are present in very low concentrations the need for biosensing systems that can detect these analytes with high sensitivity and selectivity that include very low detection limits along with high reproducibility is an important challenge. To overcome the difficulties in accomplishing all these requirements the main efforts are driven toward signal amplification and noise reduction of biosensing systems by the incorporation of nanomaterials. Nanomaterials (NMs) such as nanochannels, carbon nanotubes, graphene, metallic nanoparticles, nanowires and quantum dots are showing to be excellent materials to be used as electrochemical transducers or labels in enzymatic sensors, immunosensors, DNA sensors (or genosensors) or cell sensors. The amplification of the detection of biorecognition events (enzymatic reactions, immunoreactions, DNA hybridization reactions etc) are the most important objectives of the current bioanalytical chemistry. In this context integration of the catalytic properties of some biomolecules with those of nanomaterials is appearing to be a promising way to enhance the sensitivity of the bioassays.

There is a high demand for simple, rapid, efficient, and user-friendly alternative methods for the detection of cells in general and, in particular, for the detection of cancer cells. A biosensor able to detect cells would be an all-in-one dream device for such applications. The successful integration of nanoparticles into cell detection assays could allow for the development of this novel class of cell sensors. Indeed, their application could well have a great future in diagnostics, as well as other fields. As an example of a novel biosensor, we have reported an electrocatalytic device for the specific identification of tumor cells that quantifies gold nanoparticles (AuNPs) coupled with an electrotransducing platform/sensor (Figure 1). [1] Proliferation and adherence of tumor cells are achieved on the electrotransducer/detector, which consists of a mass-produced screen-printed carbon electrode (SPCE). In situ identification/quantification of tumor cells is achieved with a detection limit of 4000 cells per 700 μL of suspension. This novel and selective cell-sensing device is based on the reaction of cell surface proteins with specific antibodies conjugated with AuNPs. Final detection requires only a couple of minutes, taking advantage of the catalytic properties of AuNPs on hydrogen evolution reaction (HER). The proposed detection method does not require the chemical agents used in most existing assays for the detection of AuNPs. It allows for the miniaturization of the system and is much cheaper than other expensive and sophisticated methods used for tumor cell detection. We envisage that this device could operate in a simple way as an immunosensor or DNA sensor. Moreover, it could be used, even by inexperienced staff, for the detection of protein molecules or DNA strands. The same HER detection principle is applied for the detection of circulating cancer cells (CTC). [2,3] (Figure 2). 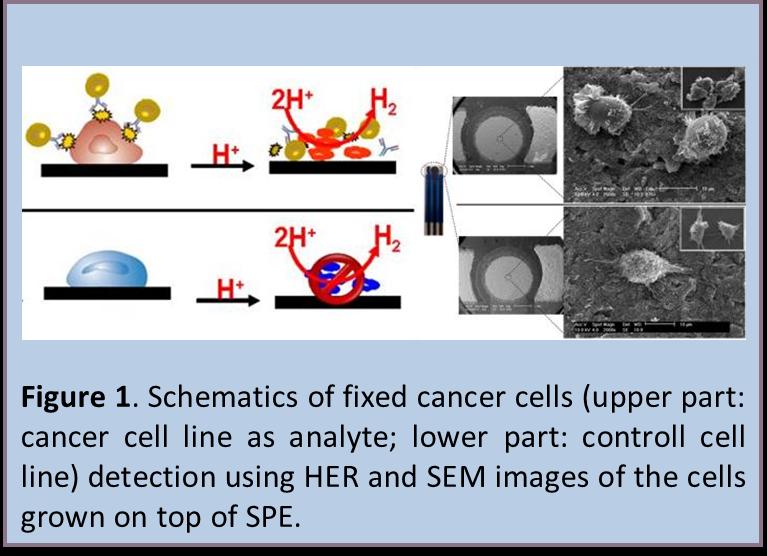 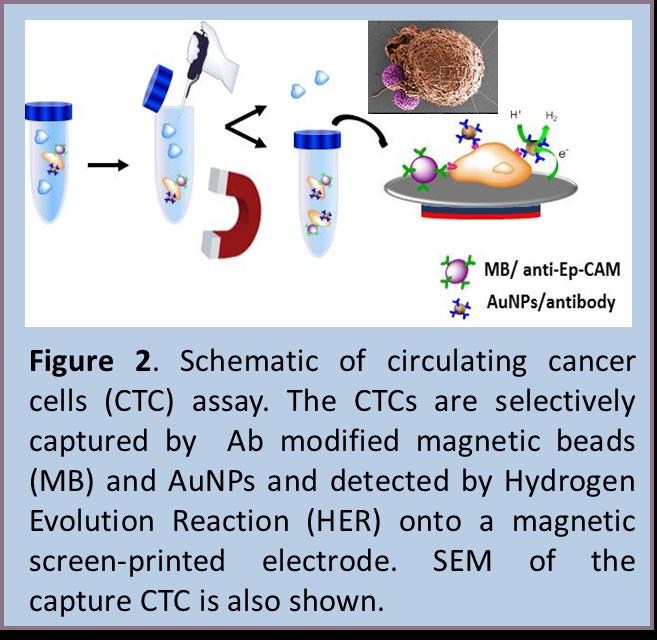 The performance of cadmium-selenide/zinc-sulfide (CdSe@ZnS) quantum dots (QDs) and the fluorescent dye Alexa 647 as reporter in an assay designed to detect apolipoprotein E (ApoE) has been studied. [4]  (Figure 3) The assay is a sandwich immunocomplex microarray that functions via excitation by visible light. ApoE was chosen for its potential as a biomarker for Alzheimer’s disease. The two versions of the microarray (QD or Alexa 647) were assessed under the same experimental conditions and then compared to a conventional enzyme-linked immunosorbent assay (ELISA) targeting ApoE. The QDs proved to be highly effective reporters in the microarrays, although their performance strongly varied in function of the excitation wavelength. At 633 nm, the QD microarray gave a limit of detection (LOD) of ~247 pg mL–1; however, at an excitation wavelength of 532 nm, it provided a LOD of ~62 pg mL–1, five times more sensitive than that of the Alexa microarray (~307 pg mL–1) and seven times more than that of the ELISA (~470 pg mL–1). Finally, serial dilutions from a human serum sample were assayed with high sensitivity and acceptable precision and accuracy. Beside QDs other nanoparticles (ex. AuNP, IrO2 NPs and Prussian Blue NPs) have been applied in protein biomarkers detection (ex. Alzheimer’s disease biomarkers [5,6] (Figure 4), breast cancer biomarkers [7], anti-hepatitis antibodies [8], prostate specific antigen [9], thrombin [10]) in real physiological samples with interest for diagnostics. 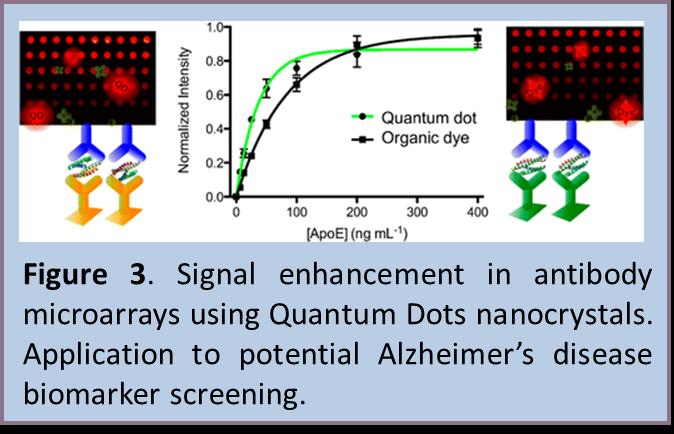 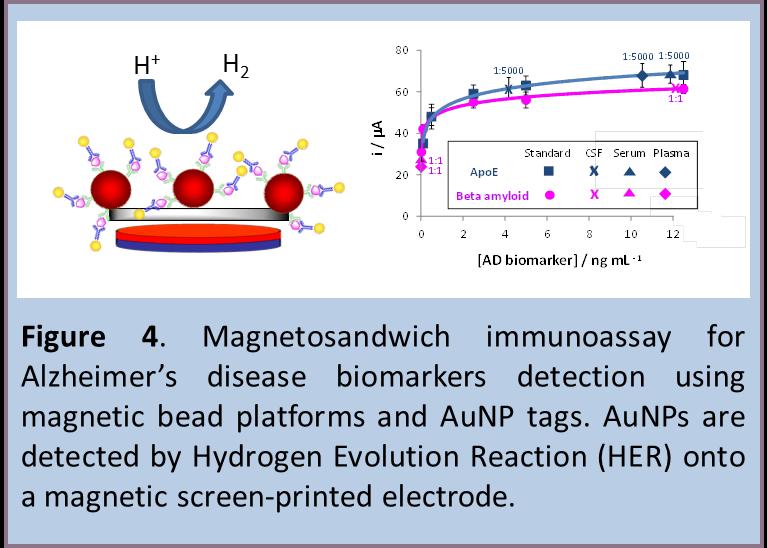 Parathyroid hormone-like hormone (PTHLH) exerts relevant roles in progression and dissemination of several tumors. However, factors influencing its production and secretion have not been fully characterized. The main limitation is the lack of specific, sensitive and widely available techniques to detect and quantify PTHLH. In this context, we have developed both electrical and optical sensing systems for PTHLH determination in samples of clinical interest.

In the first approach, we developed a novel nanochannel array (NC) device that operates through Prussian blue nanoparticles (PBNPs) (4 nm sized) as red-ox indicator for sensitive label free immunodetection of PTHLH. [11] (Figure 5) The voltammetric evaluation of the nanochannels (20 nm pore sized) blockage due to the immunocomplex formation allowed to detect levels of 50 ng/mL of PTHLH spiked in cell culture medium with high selectivity.

In a second approach, a lateral flow immunoassay (LFIA) using gold nanoparticle labels (AuNPs) for the fast and easy detection of PTHLH in lysates and culture media of three human cell lines HaCaT, LA-N-1, SK-N-AS) was developed. [12] (Figure 6) Levels in culture media and lysates ranged from 11 to 20 ng/mL and 0.66 to 0.87 μg/mL respectively. Results for HaCaT are in agreement to the previously reported, whereas LA-N-1 and SK-N-AS have been evaluated for the first time. The system also exhibits good performance in human serum samples. This methodology represents a helpful tool for future in vitro and in vivo studies of mechanisms involved in PTHLH production as well as for diagnostics. There is a great demand to develop novel techniques that allow useful and complete monitoring of apoptosis, which is a key factor of several diseases and a target for drug development.

In one project, we reported the use of a novel dual electrochemical/optical label for the detection and study of apoptosis  [13] (Figure 7). We combined the specificity of Annexin-V for phosphatidylserine, a phospholipid expressed in the outer membrane of apoptotic cells, with the optical and electrochemical properties of quantum dots to create a more efficient label. Using this conjugate we addressed three important issues: (i) we made the labeling of apoptotic cells faster (30 min) and easier; (ii) we fully characterized the samples by common cell biological techniques (confocal laser scanning microscopy, scanning electron microscopy and flow cytometry); and (iii) we developed a fast, cheap and quantitative electrochemical detection method for apoptotic cells with results in full agreement with those obtained by flow cytometry.

In another project, We presented a quantum dot signaling-based cell assay carried out in a segmental microfluidic device that allows studying the effect of anticancer drugs in cultured cell lines by monitoring phosphatidylserine translocation that occurs in early apoptosis [14] (Figure 8). The developed platform combines the automatic generation of a drug gradient concentration, allowing exposure of cancer cells to different doses, and the immunolabeling of the apoptotic cells using quantum dot reporters. Thereby a complete cell-based assay for efficient drug screening is performed showing a clear correlation between drug dose and amount of cells undergoing apoptosis. 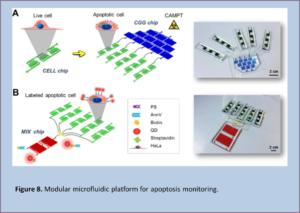