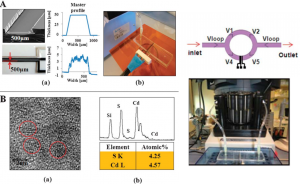 A flexible hybrid polydimethylsiloxane (PDMS)–polycarbonate (PC) microfluidic chip with integrated screen printed electrodes (SPE) was fabricated and applied for electrochemical quantum dots (QDs) detection. The developed device combines the advantages of flexible microfluidic chips, such as their low cost, the possibility to be disposable and amenable to mass production, with the advantages of electrochemistry for its facility of integration and the possibility to miniaturize the analytical device. Due to the interest in biosensing applications in general and particularly the great demand for labelling alternatives in affinity biosensors, the electrochemistry of cadmium sulfide quantum dots (CdS QDs) is evaluated. Square wave anodic stripping voltammetry (SWASV) is the technique used due to its sensitivity and low detection limits that can be achieved. The electrochemical as well as the microfluidic parameters of the developed system are optimized. The detection of CdS QDs in the range between 50 to 8000 ng mL1 with a sensitivity of 0.0009 mA/(ng mL1) has been achieved. In addition to the single in-chip flow through measurements, the design of a recirculation system with the aim of achieving lower detection limits using reduced volumes (25 mL) of sample was proposed as a proof-of-concept.

[Link to the article]