In recent years, several bacterial pathogens, toxins, viruses, parasites and explosives have been considered as potential threats for bioterrorism, among which can find Escherichia coli, Salmonella, Bacillus anthracis, Clostridium botulinum, Botulinum Neurotoxin, Vaccinia virus, Plasmodium falciparum, Trinitrotoluene, etc. Bioterrorism is extremely complex to tackle but the science and technology are fundamental elements to reduce its threat. For this reason, monitoring systems for quick identification of biomolecules and pathogens are the core of much of the basic research activities in combating bioterrorism. Diseases transmitted by blood-feeding vectors (parasites) are also a growing threat to world human health, particularly those affecting pets and transmitted by fleas, ticks, sand-flies, or mosquitoes (vector-borne diseases, VBDs). One of the most important VBDs is visceral leishmaniasis, which is endemic in 88 countries in 4 continents. Zoonotic visceral leishmaniasis, caused by the protozoan Leishmania infantum and transmitted by sand-fly vectors, is a fatal disease for domestic dogs, wild canids, and humans. Molecular techniques for pathogen DNA analysis suffer from limitations related to the need of skilled workers, the high cost, and the fact that samples must be sent to a reference laboratory. Merkoçi’s group is doing efforts by using nanobiotechnologies with the aim of developing accurate, easy, cheap, portable and ultrasensitive assays for agents that pose a biologic threat. Some nanomaterial-based (bio)sensing systems used to detect agents related to bioterrorism for safety and security applications in agriculture, food, forensics, biomedical have been developed. In-field detection of compounds such as explosives, pesticides, toxins and microorganisms are getting special importance. In this context the development of novel biosensing detection systems based on nanomaterials seems to be an advantageous alternative in comparison to classical devices. [1, 2]

On the one hand, an ultrasensitive method to determine toxicity due to pesticides in a glass lab-on-a-chip by means of enzymatic inhibition of acetylcholinesterase immobilised on magnetic beads is described (Figure 1). The reproducible insertion of a controlled amount of enzyme-coupled magnetic beads inside the chip channel and their immobilisation in a capture region with the aid of a magnetic field has been optimised. This procedure enables the easy renewal of the biosensing material after each determination in a highly reproducible manner. Several operational parameters such as the working potential for the selective detection of thiocholine (TCh) on a platinum disc electrode, the TCh detection reproducibility and sensitivity, the electroosmotic flow driving voltage and the inhibition time were also evaluated or optimised. The detection of carbofuran (one of the most toxic carbamate pesticides) has been achieved down to the nanomolar level. This method may find applications not only in environmental analysis but equally importantly in the field of security and forensic analysis since pesticides (and especially carbofuran as it is one of the most poisonous) can be potentially used by terrorists as ‘‘cheap’’ nerve agents. The proposed magnetic bead based inhibition bioassays should lead to ultrasensitive detection of other pollutants in addition to pesticides. [3] 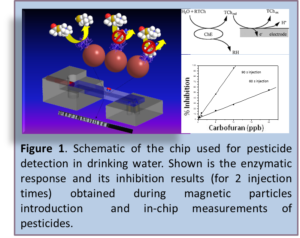 On the other hand, a pesticides biosensor based on a simple nanopaper platform has been developed for water quality assessment. This novel platform underlies under the bioluminescent bacteria Aliivibrio fischeri which light production is reduced in response to increasing concentrations of toxic compounds (Figure 2). Diuron, tributyltin (TBT) and polybrominated diphenyl ether (PBDE) have been tested as model analytes. Those are important chemicals used as herbicides, anti-fouling agents and furniture flame retardants, respectively. Merkoçi’s group has created a new fast, stable and sensitive biosensor relying on the previous well-known Microtox technology. Toxicity assays can be performed in just 5 minutes and are able to detect concentrations in the range from mg/L to µg/L, depending on each particular chemical compound. On the one hand, nanocelluose provides a biocompatible platform for bacterial growth and increase stability of the whole system. On the other hand, nanocomposites have proved to be able to be stored for several months at -20 ºC and to be recycled at least up to 10 times for new use. Finally, this system has shown outstanding properties for real sample analysis, including lake and sea waters [4]. 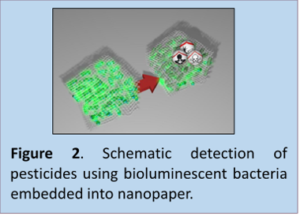 Sulfonamides have been widely used antimicrobials in health-care systems worldwide and nowadays represent a risk due to their allergenic and potentially carcinogenic characteristics. Merkoçi’s group has developed an innovative biosensor based on molecularly imprinted polymers (MIPs) and magnetic nanoparticles in order to detect and quantify sulphonamides concentration in seawater (Figure 3). The MIP allows a specific and sensitive recognition of the analyte whereas the magnetic properties provided to the biosensor enable their separation, preconcentration and manipulation [5]. A limit of detection of 10 pM has been achieved by electrochemical impedance spectroscopy in real samples. The working of this biosensor could be transferred to other analytes by changing the MIP. 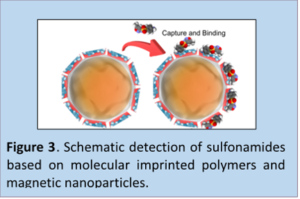 PBDEs are persistent chemicals used as flame retardants in household and industry. A miniaturized microfluidic system has been created for simultaneous detection and removal of these compounds. The platform consists of a microfluidic chip that combines an immunoreaction step together with an integrated screen-printed electrode (SPCE) for detection and a polydimethylsiloxane (PDMS)-reduced graphene oxide (rGO) chip for PBDEs elimination (Figure 4). Square wave anodic stripping voltammetry (SW-ASV) has been used as the detection method, providing a limit of detection as low as 0.018 ppb keeping reproducibility and good linearity [6]. The rGO supplies an increased adsorption capacity for PBDEs removal. To the best of our knowledge, this has been the first demonstration of electrochemical detection of flame retardants and this technology could be transferred to other chemicals using the adequate immunoreagents. 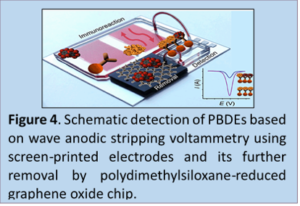 A disposable immunosensor for Salmonella enterica subsp. enterica serovar Typhimurium LT2 (S) detection using a magneto-immunoassay and gold nanoparticles (AuNPs) as label for electrochemical detection is developed (Figure 5). The immunosensor is based on the use of a screen-printed carbon electrode (SPCE) that incorporates a permanent magnet underneath. Salmonella containing samples (i.e. skimmed milk) have been tested by using anti-Salmonella magnetic beads (MBs-pSAb) as capture phase and sandwiching afterwards with AuNPs modified antibodies (sSAb-AuNPs) detected using differential pulse voltammetry (DPV). A detection limit of 143 cells mL−1 and a linear range from 103 to 106 cells mL−1 of Salmonella was obtained, with a coefficient of variation of about 2.4%. Recoveries of the sensor by spiking skimmed milk with different quantities of Salmonella of about 83 and 94% for 1.5×103and 1.5×105 cells mL−1 were obtained, respectively. This AuNPs detection technology combined with magnetic field application reports a limit of detection lower than the conventional commercial method carried out for comparison purposes in skimmed milk samples. [7] 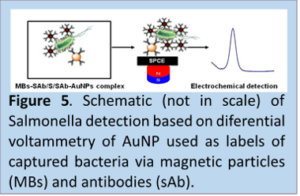 High levels of competing microflora in food and water samples compound the difficulty of isolating E. coli O157:H7. Standard methods of identifying E. coli O157:H7 require at least a full day (to rule out a negative sample) and up to several days (to conﬁrm a positive result) and employ highly qualified persons in highly specialized laboratories. Consequently, sensitive, rapid and simple methods are required. In this context we developed for the first time a simple, highly sensitive and specific immunosensing assay for rapid detection and quantification of Escherichia coli O157:H7 in meat and water samples based on the electrocatalytic properties of gold nanoparticles (AuNPs) towards hydrogen evolution reaction and superparamagnetic microbeads (MBs) as pre-concentration/purification platforms without the need of broth enrichment (Figure 6). Minced beef and water samples inoculated with different concentrations of E. coli O157:H7 are tested using anti-E. coli O157- magnetic beads conjugate as a capture platform and sandwiching afterwards with AuNPs modified with secondary antibodies and detected using chronoamperometric measurement with screen-printed carbon electrodes (SPCEs). Detection limits (LOD) of 148, 457 and 309 CFU/mL are obtained in buffer solution, minced beef and tap water samples respectively, with a broad detection range of 102 – 105 CFU/mL in all cases. Recoveries percentages after spiking of 5 different samples of both minced beef and tap water with 103 and 104 CFU/mL are 94.7 & 90.4 (in beef) and 91.3 & 94.8 % (in water), respectively. Specificity, reproducibility and comparison with a commercial lateral flow kit in terms of LOD and detection range are also studied showing clear advantages of the electrochemical method performance. The successful application of this AuNPs based technology in minced beef and tap water indicates the possibility of its using in various food items and other water resources. [8] 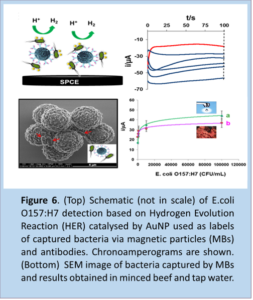 A novel methodology for the isothermal amplification of Leishmania DNA using labeled primers combined with the advantages of magnetic purification/preconcentration and the use of gold nanoparticle (AuNP) tags for the sensitive electrochemical detection of such amplified DNA was developed (Figure 7). Primers labeled with AuNPs and magnetic beads (MBs) were used for the first time for the isothermal amplification reaction, being the amplified product ready for the electrochemical detection. The electrocatalytic activity of the AuNP tags toward the hydrogen evolution reaction allows the rapid quantification of the DNA on screen-printed carbon electrodes. Amplified products from the blood of dogs with Leishmania (positive samples) are discriminated from those of healthy dogs (blank samples). Quantitative studies demonstrate that the optimized method allows us to detect less than one parasite per microliter of blood (8 × 10−3 parasites in the isothermal amplification reaction). This pioneering approach is much more sensitive than traditional methods based on real-time polymerase chain reaction (PCR), and is also more rapid, cheap, and user-friendly. Furthermore, our technique provides a valuable proof-of-concept since the double MB/AuNP-label approach is a universal methodology that could be applied for any RPA isothermal DNA amplification design. [9]

Single-step Detection of E. coli in Food and Water Samples

A novel single-step biosensor for the detection of different size analytes such as proteins and bacterial cells has been developed. The test relies on a graphene-oxide nanocomposite (GONAP) that contains quantum dots complexed with antibodies, providing a photoluminescent specific and selective biosensor [10]. Photoluminescence is always off before sample addition because of the photoluminescence-quenching character of GONAP. After sample addition, if the analyte is present, photoluminescence is recovered upon immunocomplex formation (Figure 8). No washing steps are required. This system proved to be enough versatile to detect different size-analytes such as human IgG and Escherichia coli in human serum and river waters, respectively. A limit of detection of less than 1 CFU/mL was achieved for E. coli detection after 2h of culture broth enrichment. In conclusion, this biosensor has proved to be easy-to-use, cost effective and highly sensitive and specific for several analytes and matrix. 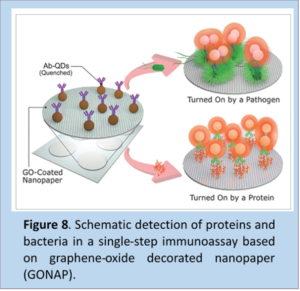