Research in the area of design and fabrication of sensors and biosensors for environment pollutants (i.e. heavy metals, pesticides, phenols, plant pathogens etc.) has become of great interest to a variety of scientific communities ranging from biological and chemical sciences to engineering communities. Several tools and techniques for heavy-metal detection based on the latest trends in (nano)materials and micro- and nanotechnologies are offering new opportunities for new heavy metal-sensing technologies with advantages such as high sensitivity and selectivity, rapidness, and cost efficiency due also to the possible integration with existing simple platforms and technologies beside the development of new ones. Optical techniques based on absorption of light by nanoparticles make use of the colorimetric and size-dependent properties of nanoparticles to develop simple, chemistry-based, fast, user-friendly, and reliable in-field devices. Among optical techniques, fluorescence is found to be of special interest for the determination of heavy metals in environmental and clinical samples. An important feature of the sensing systems based on fluorescence is their highly sensitive detection compared to absorbance-based techniques. In addition, fluorescence techniques offer a variety of detection formats. Strategies such as fluorescence turn-off or turn-on in connection to the use of either biologically or chemically modified nanoparticles are offering novel, interesting tools. Electrochemical techniques coupled to nanomaterials are also showing to be applicable to fast-responding electrochemical sensors for heavy-metal detection. Nanomaterials are showing to be interesting tools not only for heavy metals but also for sensing of phenolic compounds and pesticides, being offered at the same time as efficient destroying agent with interest for industrial applications.  [1,2]

Lab on a Tube: Point-of-Care detection of Escherichia coli 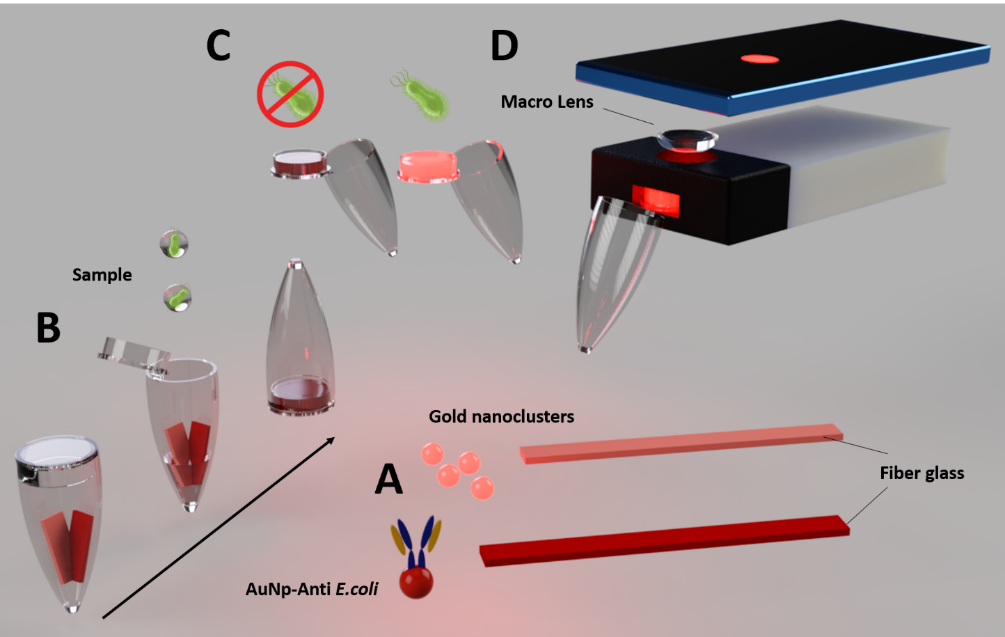 Our research team developed a new sensing device carried out in a single-step for Escherichia coli O157:H7 detection. The proposed approach relies on the Förster resonance energy transfer (FRET) mechanism based on gold nanoclusters(AuNCs) as the energy donor and antibody-functionalized AuNPs as the energy acceptor. This enables an ON/OFF fluorescent signal depending on the presence or absence of E.coli in the sample.

The assay is carried out inside a microtube that contains the reagents embedded in a glass fiber membrane. In this regard, the biosensor can be easily transported and stored up to use. The assay starts by just introducing the sample into the microtube. After 20 min of incubation, the result can be evaluated by the naked eye, during which the presence or absence of fluorescence indicates a yes/no response to the bacteria.

We developed a novel electrochromic immunosensor based on the use of polyaniline (PANI) and indium tin oxide(ITO) electrodes for the visual and fast detection of E. coli in different water samples. We achieved not only the desired electrochromic behaviour but also a convenient way to modify the electrode surface with antibodies.

A novel biosensor based on magnetic nanoparticles (MNPs) functionalized with tyrosinase in an operational synergy with a multiwalled carbon nanotube (MWCNT) network is developed. [3] An on–off external magnetic field is applied to a screen-printed electrode (SPE), which is used as a transducing platform. (Figure 1) This enables an interesting on-demand biosensing performance. The effect of each component on the response of the developed device is carefully evaluated; particularly interesting results are presented for the contributions of MNPs and carbon nanotubes. A tyrosinase-based model biosensing approach is used, while a potential of − 0.15 V versus Ag/AgCl for the electrochemical reduction of the enzyme products (quinone forms) onto the magneto-switchable SPE/MNP/Tyr/MWCNT system is applied. The response of the biosensor to catechol is also evaluated; a limit of detection (signal to noise ratio (S/N) = 3) for catechol is found to be around 7.61 μ M (S/N = 3) with a relative standard deviation (RSD) of 4.91% (n = 3). The developed device could open the door to a wide range of novel electrocatalytic and bioelectrocatalytic applications of magnetocontrolled redox enzymes. Furthermore, it could be used in miniaturized and portable biosensing systems, such as lab-on-a-chip devices, in medical and environmental applications that have a restricted quantity of sample. Further applications could be envisaged for many other fields, such as external control of catalytic transformations in bioreactors, tailoring of reversible amperometric immunosensors, regeneration of enzyme-biosensor electrodes, and external triggering of biofuel cells. A similar biosensor (based on tyrosinase) is already implemented in chip showing great potential for environmental monitoring applications. [4] 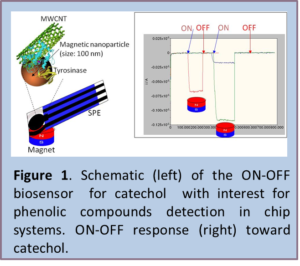 A novel way to synthesize gold nanoparticles based on the use of N-alkylaminopyrazole is shown. [5] This ligand has a triple functionality: induces AuNPs formation, stabilizes the formed nanoparticles, and even remains available for an external coordination with heavy metal ions with interest for environment monitoring. (Figure 2, left & up) The availability of N-alkylaminopyrazole ligands onto the AuNPs surface is studied using UV-Vis and NMR techniques. The mechanism of formation of AuNPs along with the synthesis optimization and characterization are studied using voltammetry and UV-Vis, and the results are discussed in detail. The application of N-alkylaminopyrazole-derived gold nanoparticles in the heavy metal ions sensing is also tested showing a high sensitivity for mercury detection at low concentration level. The functionalization of metal nanoparticles with these receptors followed by heavy metal ions detection represents a simple “mix and detect” approach with interest for several other sensing applications besides environmental monitoring. The detection of heavy metals using electrochemical stripping analysis and screen-printed electrodes (Figure 2, right-down) with interest for environment monitoring (ex. accidental pollution of sea water etc.) represent an important research line given the importance in obtaining stable and autonomous devices for such kind of applications. 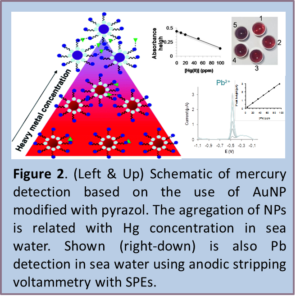 Infectious plant diseases are a main issue worldwide due to their high-impact on agriculture and crop productivity. They can be caused by fungi, viruses, bacteria, viroids, phytoplasma and nematodes. Early detection of plant pathogens could lead to a faster and more effective treatment of such infections, reducing the environmental and economic costs triggered by them. Some immunological (i.e. ELISA and DTBIA) and DNA-based technologies (i.e. PCR, RP-PCR and dot blot) are already being used for plant pathogens detection. Nonetheless, these methodologies often require expensive laboratory equipment as well as time-consuming procedures. Therefore, there is an increasing demand on cheaper, faster and lab-on-a-chip biosensors for plant diseases monitoring. In this review [6], Merkoçi’s group describes a wide range of biosensors such as antibody-based biosensors (i.e. electrochemical and optical/AuNPs immunosensors), enzymatic-based biosensors (i.e. voltammetric detection) (Figure 3) and DNA and phages-based biosensors (i.e. optical/magnetic/ fluorescent tag biosensors), as well as studies the most important commercial available related kits available on the market. 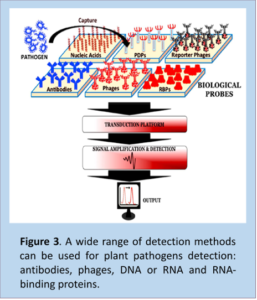 Most organic toxic compounds (i.e. pesticides) are difficult to be detected by means of antibodies and aptamers mainly due to their small size. Consequently, there is an increasing need for the development of sensitive biosensors able to detect such molecules. Merkoçi’s group has developed a multifunctional composite biosensor composed of magnetic silica beads, graphene quantum dots and molecularly imprinted polypyrrole (mSGP) [7]. On the one hand, mSGP is able to specifically and selectively detect small molecules such as a tributyltin (TBT, chosen as a model analyte in this article) thanks to its magnetic and optical properties that allow analyte preconcentration. On the other hand, graphene quantum dots provide a switch on-switch off photoluminescent response in response to TBT concentration and magnetic silica beads allow magnetic separation (Figure 4). This novel biosensor has been tested in water and seawater, obtaining a LOD of 12,78 and 42,56 ppb, respectively, and could be possibly used for different organic pollutants detection.

Another approach to detect TBT relies on molecular imprinted polymers (MIPs), which are highly effective polymers for chemical compounds detection [8]. The combination of MIP composites and Fe3O4 magnetic nanoparticles provides a user-friendly sensor that enables selective separation and preconcentration of the analyte as well as a fast impedimetric measurement for TBT quantification (Figure 5). A limit of detection of 5 pM and a limit of quantification of 18 pM have been achieved, showing wider detection ranges than most of the systems found in the literature as well as one of the lowest LODs. The high sensitivity given by this biosensor comes from the selectivity of the MIP used for its construction. Finally, MIP- Fe3O4NPs composites showed robustness and stability for electrochemical pesticides detection in real matrix, such as sea water. 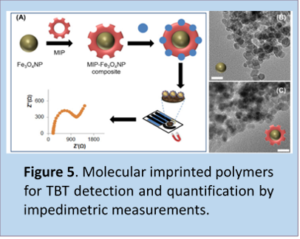